The experience of an educational exchange to Denmark in 2011 continues to provide professional direction about what’s important in the life of a school.

During my time at Viborg Katedralskole I saw how democratic values were nourished by the culture of the school and of the nation. Denmark is regularly listed as the happiest and least corrupt country in the world. After living in Viborg and working at the school, it was evident to me why.

An anecdote: during one of my first days at the school a student knocked on the rector’s door while we were having a meeting. Helge, the principal (rector) enquired into what he wanted. I was surprised to discover that this student wanted to know how much money the principal was spending on the school webpage and why. I was even more surprised when Helge thanked the student and made a meeting time in his diary to discuss this issue. I am not sure that many Australian students would be so bold.

I have written about the Danish approach to civics and citizenship many times previously and about the lesson learnt while on exchange; that students need to participate, in an authentic manner, in the democratic life of the country. I witnessed student run events out of school hours which invited the candidates in elections to debate each other in a fun and entertaining way. The school hosted political forums for the candidates in school hours and these same politicians were permitted to wander into the school grounds at breaks and distribute pamphlets or talk to the students. The socially democratic and inclusive nature of politics was evident in the school system which appeared much more egalitarian than in Australia. 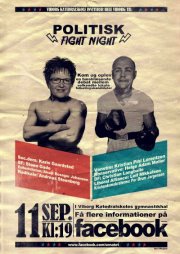 “When we look back at the impact of Grundtvig on Danish history, a simple conclusion leaps to the fore. Not all, indeed not many, small nations survive and prosper (Davies 2011). The popular and cohesive will of the Danes has most certainly rested on this firm foundation, without which the pattern of the past may well have been different.” *

The context for such an environment and philosophy dates back to the 19th century. The Danes particularly benefitted from the educational philosophy of NFS Grundtvig (1783-1872) – poet, pastor, politician, author and all round polymath – who sowed the seeds of personal freedom, democracy, participation and creativity in the educational and larger life of the nation. He believed that education should be both popular, practical and idealistic in an effort to develop a broader cultural and intercultural outlook that was both humane and scientific. This was very evident from my experiences in Denmark, Grundtvig promoted equality and opposed all compulsion, including exams, as “deadening to the human soul”.  His influence lives on in Denmark today.

“National identity is one form of the even larger phenomenon of identity, plain and simple. Key to the idea of identity is the notion that there can be a disjunction between one’s inner, authentic self and the social norms or practices that are required by the surrounding society. Identity becomes problematic, and a source both of personal anxiety and political contestation, because of a perceived gap between the inner self and outward social practice.” Francis Fukuyama*

This quote from Fukuyama, from an essay about Grundtvig, is profoundly perceptive. Grundtvig understood what was needed to nurture the populace and establish principles of individual liberty of conscience and of speech and give the majority access to a progressive education. Paraphrasing SAJ Bradley, Grundtvig – through poetry and song as well as through more direct polemic and action – promoted a nationhood and community that was inclusive and faced outwards to the world that made sense to the people who lived – through accident of birth – in a country that previously had not been even remotely equitable. His success, evident to Fukuyama and anyone who spends time among the Danes, is certainly to be admired.

You may be interested to read more about Grundtvig’s life and ideas here or join me in reading, Building the Nation: N.F.S. Grundtvig and Danish National Identity* by John A. Hall, Ove Korsgaard, Ove K. Pedersen.

“Our school is located in the federal electorate of Whitlam, or Throsby as it has been known since 1984, covers 1,331 sq.km in the southern Illawarra and NSW southern highlands. Along the coast it takes in all of the suburbs to the south and west of Lake Illawarra in the Wollongong and Shellharbour local government areas, including Warilla, Albion Park and Dapto. The electorate also extends up the Illawarra Highway through Macquarie Pass to take in Robertson, Moss Vale, Berrima, Bowral and Mittagong.”  SOURCE

Our own school has learnt much from the Danish model and is actively nurturing democracy with a variety of programs. Our Nurturing Democracy Civics and Citizenship program provides practical experience with the nature of living in a democracy. Students elect their own representative by secret ballot and a team of students assist with counting using preferential voting. The Student Representative Council (SRC) act as polling officials. Students attend forums with federal politicians to propose ideas and have also influenced the local council by attending meetings with ideas to improve the local facilities. Increasingly students are participating in forums to support their personal agendas about progressive social change.

Recently, the SRC conducted our third candidate’s forum prior to a state or federal election as an important part of our Nurturing Democracy program to provide opportunities for students to practically engage with learning about civics and citizenship. Five of the six candidates, contesting the federal seat of Whitlam on the 2nd July, participated:

The process, based on the Danish model, is as follows:

1. The moderator explains the goals and process to the audience while introducing the panel
2. Each candidate has a maximum of 3-minutes to outline his or her vision for the electorate of Whitlam
3. Each candidate has 1-minute to make a point and ask another candidate a question.
4. There is a 1-minute response time for each question
5. The moderator calls for questions from the audience to candidates
6. Response time is 1-minute
7. The candidates make a 1-minute closing statement
8. The students then mingle with the candidates at a BBQ to ask more questions
9. Students debrief with peers, staff and family in the lead-up to the federal election on July 2nd where some of our 18 year olds are voting for the first time.

Questions from the students included:

BEN: What do you believe is the single most important issue in this election campaign for the people voting in Whitlam? Why?

TAYLOR: If elected HOW would your party protect both our local environment and World Heritage sites like the Great Barrier Reef?

EMILY: What other policy areas does the Non-custodial Parents Party feel strongly about besides the issue suggested in your party’s name?

LANCE: How will your party further the knowledge and education of students to contribute to the promotion of a smart and innovative Australia?

ALLY: This question is for all candidates and I would like a YES or NO answer rather than a 1-minute response. Do you support same-sex marriage?

ADELINA: This question is for all candidates and I would like a YES or NO answer rather than a 1-minute response. Do you support the current government’s tough policies towards refugees seeking asylum in Australia?

LUKE:This question is for all candidates and I would like a YES or NO answer rather than a 1-minute response. Does your party support the full implementation of Gonski funding for education?

TIANA: This question is for all candidates and I would like a YES or NO answer rather than a 1-minute response. Do you support Australia becoming a Republic?

SOORAJ: Climate change is mostly being influenced by human activities, what are your plans to reduce this?

TIM: With the rapid increase of car usage over the past 5 decades and the dramatically increasing negligence of our rail infrastructure, what do you plan to do to help both the public and heritage rail sectors?

PATRICK: How does the National Party differ from it coalition partner, the Liberal Party?

PAIGE: Which of the candidates do you support most in Whitlam? Can you rank them from most to least in agreement?

The YES or NO questions are quite effective in highlighting the practical implications of ideological differences in policy areas that the students can easily grasp. When the candidate says NO or YES to an area they are passionate about it helps with formulating their own political positions.

Students and candidates were interviewed by the local newspaper and the ABC radio about the forum.

At our candidate’s BBQ I heard students discussing a range of issues raised in the forum with their friends. There was also good informal discussion with the candidates. Democracy was made a little less theoretical and I heard one 18 year old say to a candidate that she would cast her first ever vote for him based on what she had heard in the forum. She hadn’t been intending to bother voting but felt inspired to participate.

How does your school nurture democracy?

Historians indeed hope that their books might entwine intimately with the lives of their readers and that their histories may sit on bedside tables ready to enter dreams. History – that unending dialogue between the present and the past – is essential to human consciousness. It is conducted as part of the daily business of […]

Active and informed citizens…are committed to national values of democracy, equity and justice, and participate in Australia’s civic life.     Melbourne Declaration The Student Representative Council (SRC) hosted a forum today for the candidates seeking election in the state electorate of Shellharbour where our school is located. The event was packed, attended by all senior […]

This book is written in the belief that the nations of Scandinavia and Finland, or Nordic Europe*, do continue to provide important living proof that economically successful, socially fair and environmentally responsible policies can succeed. Northern Lights: The Positive Policy Example of Sweden, Finland, Denmark and Norway by Andrew Scott will brighten our national mood, […]

I was adopted as a baby. My adoptive parents made no secret of that fact but never had any information they could share about my ancestry. I often wondered what my ancestors had experienced and where they originated. It made me sad that I would likely never know. It was not something I talked about […]

There have been many posts about our school’s nurturing democracy program over the last few years at my blog, including this one about our plan to hold formal elections conducted by the Australian Electoral Commission (AEC). Today, we made significant progress in assisting students to learn about how preferential voting works in our country as almost 900 […]

Does your school hold authentically democratic elections? The Australian Electoral Commission (AEC) is conducting our school elections for the first time in 2014 as our ‘Nurturing Democracy’ program continues into its third year. Students from Year 7-11 will experience the same voting protocols that their parents recently followed at the 2013 federal election. Students will […]